What are Unplugged Ceremonies?

Unplugged Ceremonies are growing in popularity as Smart Phones, Facebook, Instagram and SnapChat become almost a way of life for us.  In the 3.5 years I’ve been shooting weddings, I’ve noticed that more and more people are hiding behind their phones during ceremonies, watching the bride through a (sometimes cracked) piece of glass, instead of being fully present in that moment.

Typically, an Unplugged Ceremony will have signage somewhere at the front of the aisle (there are a ton of great examples on Pinterest and Etsy), asking friends and family to keep their phones and cameras tucked away so they can be connected and present during the proceedings. Other times, the Officiant will ask everyone to turn their phones off and deliver a similar message.
What do I think?  I see both sides. There’s nothing worse than an overbearing aunt and uncle (Oohh yes, we’ve had them) that jumps in front of us all day; follows us around as we’re shooting, grabbing the same shots; has their massive iPad in the air the entire ceremony; or stands up in front of us during the first kiss so they can get the perfect shot.  In the contrary, I get that family and friends are genuinely excited to see you tie the knot, want to capture those moments so they have them and are likely impeding on our space without even realizing it.
If an Unplugged Ceremony is just too restrictive for your style, I totally get it.  We’ll continue to secretly cross our fingers and toes at the beginning of every wedding, hoping that guests can respect what we’re there hired to do and give us that freedom and ability to do so. 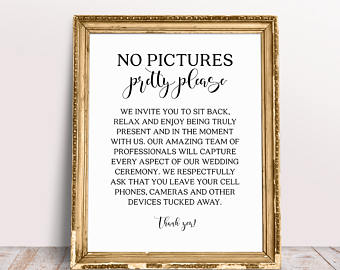 « Becky + Dan | A Willowdale Wedding
First Look or Walk Down the Aisle? »